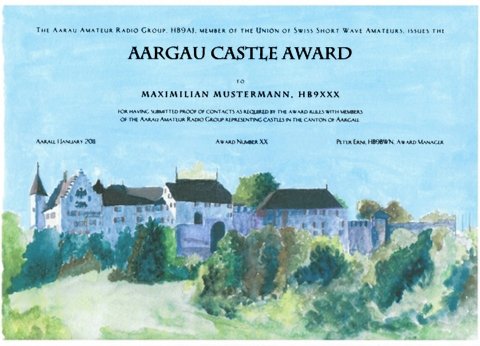 Overview of the Castles

Biberstein Castle (HB9COB): Biberstein Castle near Aarau, built by the counts of Habsburg-Laufenburg, was first mentioned in 1280. Over the centuries the castle changed hands quite a few times and was rebuilt extensively. Since 1804 it has been owned by the canton of Aargau and today is home to an institution for mentally or multiply handicapped adults.

Fortress of Aarburg (HB9CTU): The Fortress of Aarburg is an impressive fortification high above the small town of Aarburg. Originally built to guard the harbour on the river Aare the fortress played an important role in protecting the route between the towns of Bern and Zurich. In the past the fortress has been used as a prison. Today it houses an institution for juvenile offenders.

Governor's Castle (HB9BWN): Governor's Castle (Landvogteischloss) is a small castle in the town of Baden on the eastern shore of the river Limmat. First mentioned in 1265, the castle guards the wooden bridge linking the two parts of the town. For centuries it served as the residence for the governors from other Swiss cantons who ruled over Baden County. It now serves as a historical museum for the region.

Habsburg Castle (HB9MQM): Habsburg Castle is the ancestral seat of the Habsburg dynasty which for centuries ruled over Austria and much of Europe. The first castle was built around 1020. From that time only ruins are left. The Habsburgs lost the castle to Bernese invaders in 1415. Today, Habsburg Castle houses a restaurant and a small historical exhibition.

Hallwyl Castle (HB9AQF): Hallwyl Castle is built on two islands in the Aabach a few hundred meters from the north end of Lake Hallwil in the town of Seengen. Hallwyl Castle is first mentioned in the 13th century. The castle in its present form goes back to the 16th century. For centuries the castle was the family seat of the Counts of Hallwyl. In 1994 the family donated the castle to the canton of Aargau. After an extensive renovation it is now used as a museum and for open air performances.

Kasteln Castle (HB9XAR): Kasteln Castle in the village of Oberflachs is first mentioned in historical documents around 1200. In the 17th century the castle was completely rebuilt and enlarged. It is the only fully baroque castle in the canton of Aargau. Today its buildings are used by a boarding school.

Liebegg Castle (HB9KAB): Liebegg Castle is a small castle south of the town of Gränichen in the Wyna valley. The original castle was built in the second half of the 13th century. Since the 15th century Liebegg Castle had a succession of owners mostly belonging to the Bernese aristocracy. In 1948 the canton of Aargau bought Liebegg Castle which today is used as a convention center.

Schlössli Castle (HB9KAM): Schlössli Castle goes back to the 13th century and is the oldest building in the town of Aarau, the capital of the canton of Aargau. It was originally built to guard the bridge over the river Aare, but since the 16th century influential local families used the Schlössli as their residence. Today the castle is used as the town museum.

Wildegg Castle (HB9BAQ): Wildegg Castle overlooks the town of Möriken-Wildegg. The first castle which burned down in the late 16th century was built around 1200. Today's castle, basically a baroque country seat, has no resemblance to the first castle. In 1912 the last private owner bequeathed the castle to the Swiss Confederation which in turn donated it to the canton of Aargau in 2009.